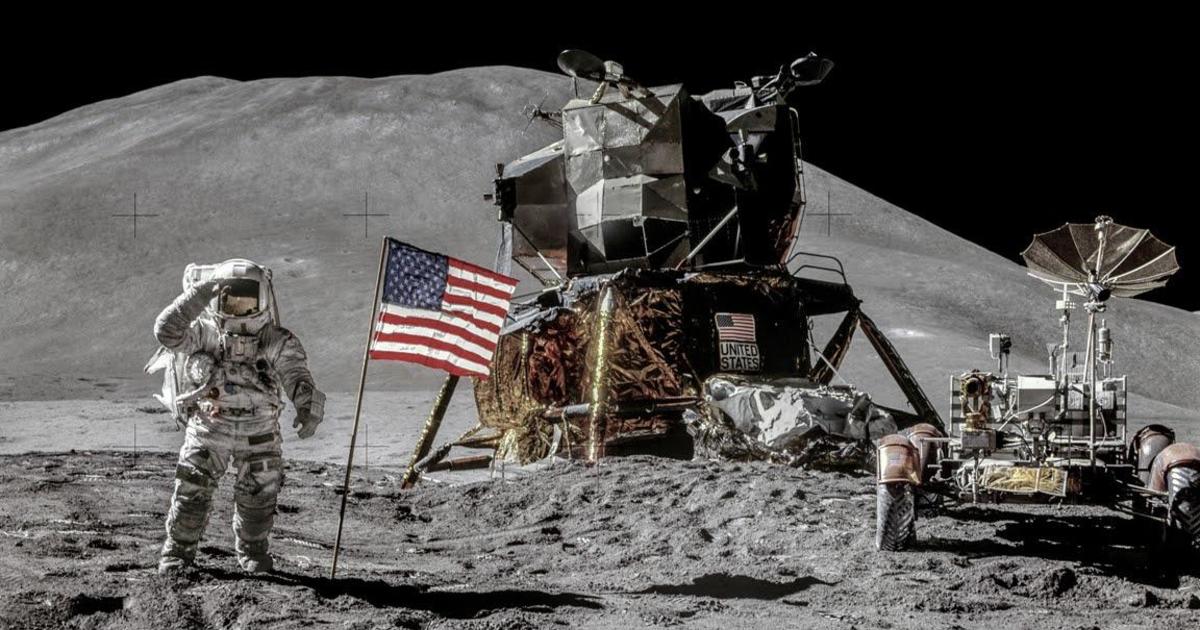 Historian Andy Saunders has sifted through 35,000 NASA images and spent the last few years remastering photos from the Apollo missions as a personal project, culminating in a book titled “Apollo Remastered” set to be released in celebration of the 50th anniversary of the lunar mission.

Commander Jim Irwin, seen above, was one of three astronauts who participated in what has been called the most scientifically intensive moon landing since mankind’s arrival.

Apollo 15 was the first mission to deploy the Lunar Roving Vehicle. The LRV was a lightweight, electric vehicle designed to operate in the low-gravity vacuum of the Moon.

Remastered panorama of the lunar module

The lunar module, where two astronauts lived from July 30 to August 2, 1971. Apollo 15 holds the record for the longest lunar mission at 295 hours.

A panorama view of the first use of the Lunar Roving Vehicle (LRV) on the moon and the 14,000-foot Mount Hadley. The panoramas were created by stitching together Hasselblad 70mm still photographs from the mission.

Remastered panorama of first use of LRV with annotated locations

Saunders told CBS News that “the panoramic shots for Apollo 15 involve first ‘remastering’ each shot from the film and then aligning and stitching these together in digital processing software.”

Commander Dave Scott on the LRV

Commander David Scott rides the LRV, the first car on the moon.

NASA’s acting chief historian Dr. Brian Odom told CBS News that “Apollo 15 was a critical mission for the lunar program as it transitioned from a transportation paradigm to hardcore science.”

The Apollo 15 mission was focused primarily on scientific collection, with multiple spacewalks to collect lunar material. This included the famous Genesis Rock, which is 4 billion years old.

A view looking back to the lunar module, taken while on a space walk to collect lunar material.

Odom: “Seeing historians like Andy [Saunders] dig into that mission and produce such cutting-edge results is incredible and speaks to the program’s overall importance. Not only has Andy done a remarkable job bringing more details of this mission to light, but his incredible work has also created a lot of public excitement as NASA goes back to the Moon with the Artemis program.”

Remastered and annotated panorama of lunar surface, including LRV

Saunders: “The original NASA photographic film from the Apollo missions is some of the most important and valuable film in existence. It is securely stored in a freezer to maintain its condition… the film rarely leaves the freezer. The vast majority of Apollo images seen by the public over the last half-century have been copies of master-duplicates, or copies of copies, leading to the gradual degradation in the quality of the images we see.”

Notations include the location of the lunar module and the Hadley Rille.

Saunders says the original photos are “usually significantly under-exposed, and any significant gain/levels increase introduces a whole host of artifacts and glare from the scanning process. It’s a time-consuming, painstaking process… but the reward is to see these incredible moments in history represented in unprecedented clarity.”

Remastered photo of plaque on the LRV

Remastered photo showing the commemorative plaque on the LRV celebrating “man’s first wheels on the moon.”

Underneath the lunar module

A remastered photo of an engine nozzle under the lunar module that was damaged upon landing.

Remastered photo of the lunar surface

In a photo taken from the Command and Service Module, the lunar surface emerges from the darkness.

Remastered photo of Earth from the moon

A sliver of Earth’s crescent rises above the lunar horizon.