After years of waiting, Disney finally began revealing its plans for the upcoming 50th-anniversary celebration at Walt Disney World. The “World’s Most Magical Celebration” is slated to kick off October 1, with new shows debuting at three of the four Disney World theme parks.

It comes as no surprise that the Magic Kingdom, the heart of the celebration, will see a brand-new nighttime spectacular.

“Disney Enchantment” will finally bring projection mapping to Main Street. The technology has been used at Disneyland for nearly half a decade, but this will be the first show at the Magic Kingdom to use it. 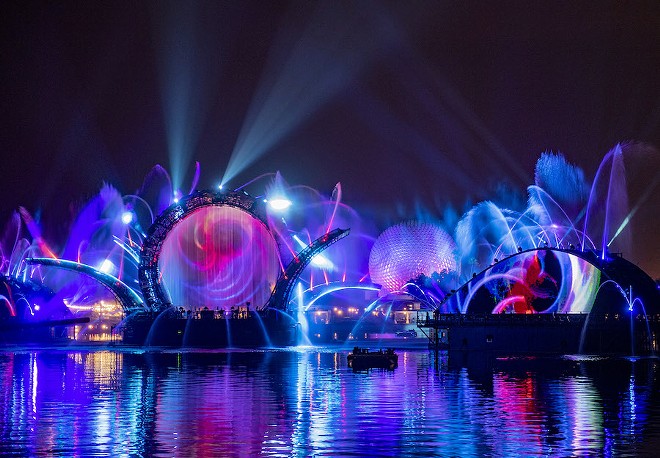 Like “Disney Enchantment”, Epcot’s “Harmonious” will lean heavily on mixed media to augment fireworks. Five large permanent barges are now installed in the World Showcase lagoon, and testing has already begun on the show. Before the show’s debut in October, Epcot is running an altered version of the “Epcot Forever” firework show.

Jet skis with attached kites have been removed from the “Epcot Forever” show as the lagoon is an active construction site. But Disney isn’t completely giving up on the kite-based spectacle.

The jet skis will head to Animal Kingdom, where they will anchor the new daytime KiteTails show. After Animal Kingdom’s short-lived Rivers of Light nighttime show was canceled, the large custom-built amphitheater has sat empty. While not providing nighttime entertainment to the park, Disney KiteTails does reactivate this theater and offers more family entertainment in this thrill-heavy corner of the park. 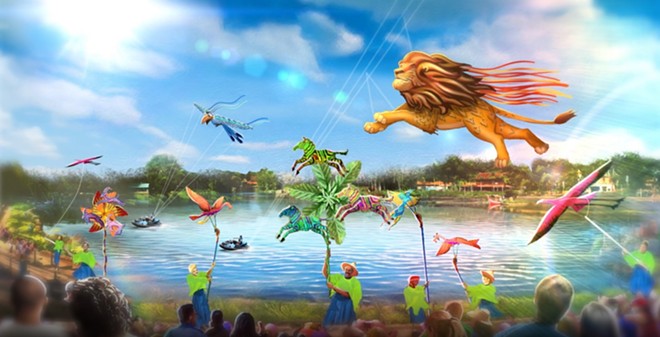 Animal Kingdom won’t be without some new nighttime entertainment. Like the other three parks, Animal Kingdom will see new projection mapping activations on its park icon, the Tree of Life. Similar to the Nighttime Awakenings, the “Beacons of Light” shows will be short diversions that take place throughout the evening. Epcot’s will be the most notable due to the installation of new LED beacons on Spaceship Earth. Those will be used for multiple shows and ambiance shifts throughout the evening at the park.

Ironically, the new light package on Spaceship Earth may debut while the attraction itself is down for a major overhaul. That project was previously announced but delayed. Recent reports indicate that the project is moving forward yet again.

Missing from the recent announcements was any major additions to Disney’s Hollywood Studios. “Fantasmic” is currently closed and will take some time to restart, though Disney has yet to share if this show will see any noticeable difference once it returns.

While fireworks are returning to Magic Kingdom and Epcot, Hollywood Studios is still without any nighttime entertainment. According to Touring Plans founder Len Testa, that may be due to supply chain issues.

Many fans have expressed concern that Disney has yet to announce any parades connected to the celebration. These may be introduced at a later date. A nighttime parade is strongly rumored for Universal Studios Florida, like some version of the nighttime parade found at Universal Studios Japan. Florida’s theme park resorts commonly release information on new offerings to offset similarly timed announcements from competitors. That, along with hesitation to announce post-pandemic offerings, may contribute to the lack of information regarding the future of parade offerings at Disney World.

The pandemic added complexity to Disney’s timeline and budget calendar, with some expected 50th-anniversary offerings not happening. Thankfully for fans, Disney is already working on its next anniversary celebration. The company-wide centennial anniversary is just twenty-seven months away. That celebration is expected to begin just six months after the closing of Disney World’s “World’s Most Magical Celebration.”

2021-07-04
Previous Post: Issues to do in West Palm, Jupiter, Delray for the weekend of June 25
Next Post: Leisure profession guidance on networking, mentors, employment